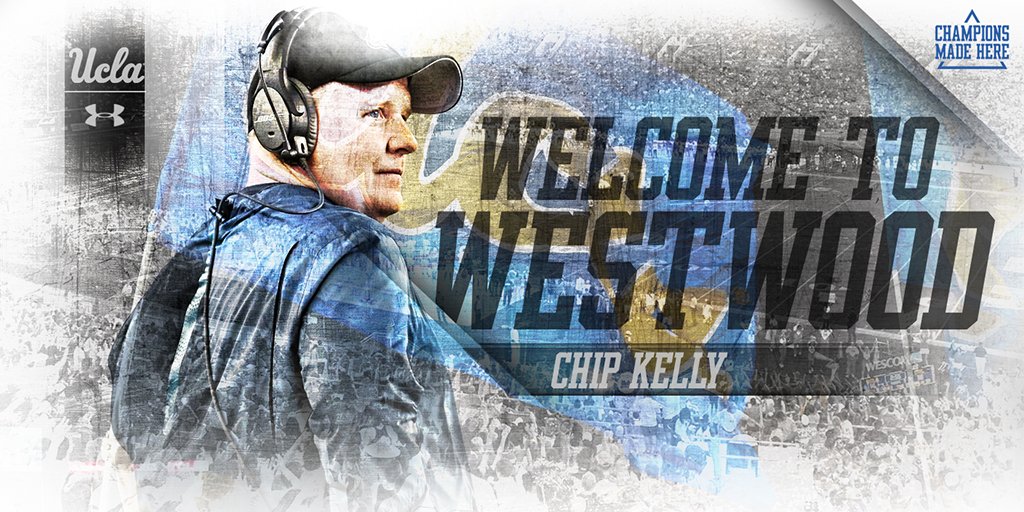 “I am thrilled to welcome Chip Kelly to Westwood,” said Guerrero. “His success speaks for itself, but more than that, I firmly believe that his passion for the game and his innovative approach to coaching student-athletes make him the perfect fit for our program. ‘Champions Made Here’ is more than just a mantra at UCLA, and I’m confident that Chip will lead UCLA Football back to competing for championships. I’d like to thank Josh Rebholz, Casey Wasserman and Troy Aikman for their input during this process, as their candor, experience and support were invaluable.”

Kelly will be formally introduced to the UCLA community and to media on campus Monday afternoon.

“It is an absolute honor to join the Bruin Family, and I am grateful to Chancellor Block and to Dan Guerrero for this incredible opportunity,” said Kelly. “UCLA is a world-class institution with a distinguished history in athletics, and we will do our part to uphold its tradition of excellence.”

Kelly brings to Westwood 27 seasons of coaching experience at both the professional and collegiate levels, most recently serving as head coach of the San Francisco 49ers (2016) and Philadelphia Eagles (2013-15). The Eagles won 10 games in each of Kelly’s first two seasons, and an NFC East Division Championship in his first season in 2013, when he was also named the Maxwell Club NFL Coach of the Year.

He began his head coaching career at the University of Oregon in 2009, leading the Ducks to a 10-3 record and a trip to the Rose Bowl in his first year at the helm. Kelly finished his time at Oregon with a 46-7 record as head coach (2009-12), including victories in the Rose Bowl and Fiesta Bowl. In his four seasons in Eugene, Kelly became the first coach in school history to guide the program to three consecutive undisputed conference championships (2009-11) and its first three 12-win seasons (2010-12). Oregon made an appearance in a BCS Bowl game in each of Kelly’s four seasons, including a trip to the National Championship game following the 2010 season. Kelly was named the Pac-10 Coach of the Year in back-to-back seasons in 2009 and 2010, and Associated Press Coach of the Year in 2010.

“I am pleased to welcome Chip Kelly to UCLA, confident that he will work tirelessly to focus on the whole student, both as an athlete and as a scholar,” said UCLA Chancellor Gene Block. “In my discussion with Coach Kelly, I sensed a sincere commitment to help our student-athletes become the best that they can be. I look forward to his presence in Westwood.”