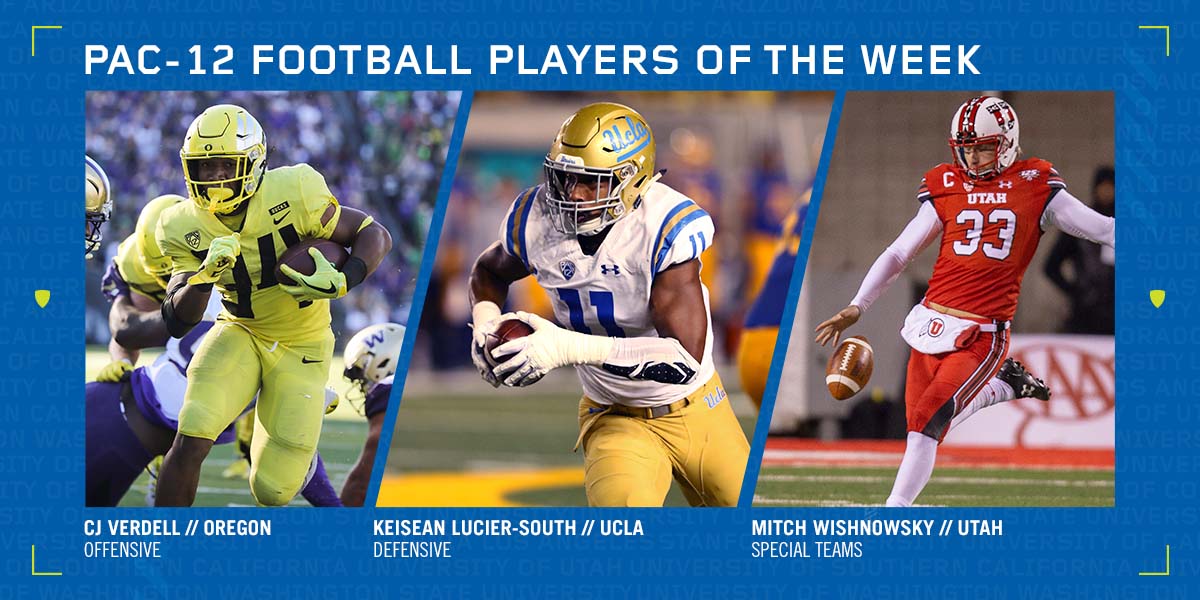 DEFENSIVE: #11 Keisean Lucier-South, Jr., LB, UCLA (Santa Ana, Calif.)
• Posted a career-high 3.5 tackles for loss, tied his career-high with a sack which forced a fumble, picked off his first career interception, and recovered a fumble which he returned 38 yards for a touchdown.
• After UCLA had taken a 20-7 lead entering the fourth quarter, the Bruin defense forced Cal turnovers on four straight possessions and Lucier-South was involved in three of the four takeaways – interception, fumble recovery and return for touchdown, forced fumble on a sack.
• The redshirt junior was credited with six total tackles in helping UCLA to its first win of the season.

SPECIAL TEAMS: #33 Mitch Wishnowsky, Sr., P, Utah (Perth, Australia)
• Had four punts for a season-high average of 48.2 yards per punt against Arizona. Arizona had zero yards on one punt return.
• Wishnowsky, who had two punts of 50 or more yards (long of 55), landed three of his four punts inside the 20-yard-line and two inside the 10. His final punt was a 55-yarder downed on the Arizona 2-yard line with 2:33 remaining in the game.
• He also faked a punt for a 28-yard rush (the longest of his career) to set up Utah’s final touchdown of the game.
• Wishnowsky ranks second in the Pac-12 and 19th in the nation in punting (44.6).