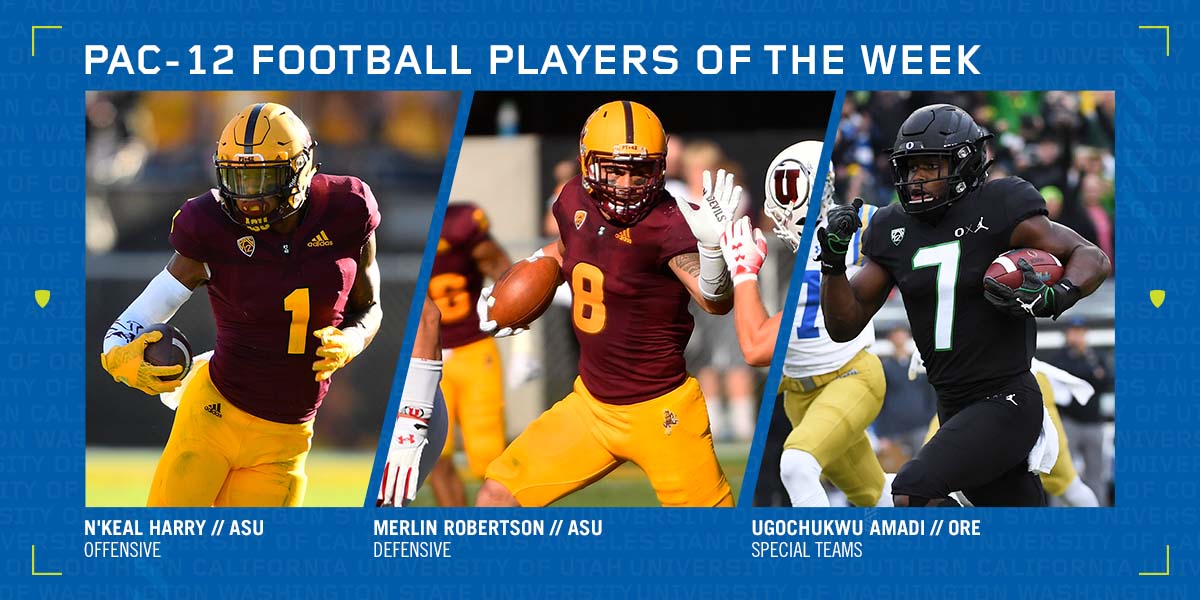 OFFENSIVE: N’Keal Harry, Jr., WR, Arizona State (Chandler, Ariz.)
• Harry caught nine passes for 161 yards and a career-high three touchdowns in ASU’s 38-20 upset of No. 16 Utah
• Harry had touchdown receptions of 3, 23, and 61 yards. Seven of his nine receptions were good for a first down and/or touchdown.
• His three-yard TD reception in the first quarter put ASU up 14-0. Hauled in a 23-yard TD reception with 1:01 left in the first half that put ASU up 21-17 after Utah had reeled of 17 straight points. Had 61-yard TD reception on the opening play of the fourth quarter that extended ASU’s lead to 28-20.

DEFENSIVE: Merlin Robertson, Fr., LB, Arizona State (Gardena, Calif.)
• Led ASU with nine tackles, including one TFL, and recorded his first career interception in ASU’s 38-20 upset of No. 16 Utah.|
• Led a Sun Devil defensive effort that held the Utes, who came in averaging 41 points in their past four games, to only 325 yards for the game and only three points in the second half.
• After the Utes scored on three straight possessions, Robertson picked up his first career interception on Utah’s first possession of the second half.

SPECIAL TEAMS: Ugochukwu Amadi, Sr., S, Oregon (Nashville, Tenn.)
• Gave Oregon a 7-0 lead against UCLA with a 56-yard punt return for a touchdown in the first quarter, which marked Oregon’s first punt return for a TD since 2015 at Michigan State.
• Averaging 24.1 yards per punt return this season (8 returns). Four of Amadi’s eight punt returns on the season have gone for over 20 yards while he is tied for the national lead with two returns of 50-plus yards.
• Amadi is the only FBS player in the nation with a punt return TD and a pick-6.
• Also added three tackles, including one for loss, in the win over UCLA.

I am a BLACK MAN!..... I build .... I don't tear d
Instagram post 18106905628095734
Center of Hope Drive-thru Food Giveaway powered by
Calling all 5th, 8th, 12th graders are you ready f
Congratulations UCLA Bruins Joshua Kelley on being
Congratulations to UCLA Bruins Darnay Holmes on be
Until Tomorrow
#Repost @fi360news • • • • • • Dignity
The Brothers of Phi Beta Sigma Frat Inc present 'W
The Brothers of Phi Beta Sigma Frat Inc present 'W
LA Wildcats Defense looking to cause trouble today
No look pass made famous by reverse 23, but tonigh
Even when your in the storm you gotta come to work
Sometimes time moves in slow motion like Josh John
Tiger Woods the new tournament host for the Genesi
Harold Varner III made some birdies this week at G
The Dallas Renegades running game fueled by Camero
Had a cool time capturing a few images for the XFL
Kobe Bryant...... Mamba out!
Had a great time using LTE studio to shoot @offici
Load More... Follow on Instagram