That streak ended Saturday with Cal edging out a 24-20 victory in the 122nd playing of the Big Game on the back of its stingy defense and a gutsy performance from starting quarterback Chase Garbers (7).

Garbers made his return to the lineup last week when the Bears were pummeled by USC at home after missing the entire month of October. He was forced to leave before the half, however, and though he was named the starter coming into the game this week, he hadn’t been publicly cleared to play up until game-time.

For the Cardinal, they were without their starter as K.J. Costello was ruled out for the second straight week. Redshirt sophomore Davis Mills (15) gave Stanford an experienced leader under center with the quarterback starting five games this season, including a school-record 504-yard passing performance in a loss to Washington State last week.

This game was balanced and highly competitive from the start.

The Cardinal struck first, scoring a touchdown on their opening drive with a 40-yard catch and run by senior receiver Donald Stewart (8).

Later in the quarter, the Bears evened the score with a 13-play, 90-yard drive finished off by running back Christopher Brown Jr. (34) on a seven-yard rushing touchdown.

Both teams would capitalize on field goal tries in the second quarter to make it 10-10 before the Cardinal blocked the Bears’ field goal attempt just before the end of the half, their fourth blocked field goal of the year.

In the third quarter, the strength of the Cal defense emerged with the self-described “takers” pulling interceptions on two straight Stanford drives.

Stanford would regain the lead despite their struggles with turnovers in the quarter when their workhorse senior running back Cameron Scarlett (22) drove in a one-yard rushing score to make it 17-10.

The back-and-forth scoring continued in the fourth quarter with the Bears finishing off an 84-yard drive when Nikko Remigio (4) hauled in an 18-yard touchdown pass from Garbers in the back of the endzone, followed by a field goal from Stanford placekicker Ryan Sanborn (27) to push the Cardinal ahead once more, 20-17.

Driving toward their passionate fans packed into the corner of Stanford Stadium, the Bears needed at least a field goal when they regained possession with just 2:23 remaining.

It was Garbers, playing in his first full game since he orchestrated an upset victory at Ole Miss on September 21, who gave his team the lead on a 16-yard rushing touchdown with 1:19 left to play.

Finally, the team put its fate in the defense, as they have throughout the season and through most of head coach Justin Wilcox’s tenure thus far.

The Bears stopped the Cardinal shot on fourth down with 41 seconds remaining and the Bears had ended the rivalry drought.

With the win, the Bears are now bowl-eligible for the third time in five years and in consecutive seasons for the first time since 2008 and 2009.

For Wilcox, this is his first victory over the cross-bay rival Cardinal in three seasons at Cal, while Stanford coach David Shaw was 8-0 against the Bears coming in.

“It was awesome. What it means for this team and this Cal community is something special,” Garbers said after the game. “And after 10 years of not having The Axe, we finally got it back. I think winning this definitely makes a statement in the history of the Big Game and going forward.”

Stanford needed victories against Cal and over visiting Notre Dame next week to give themselves a chance at postseason play and will see the end of a decade-long bowl streak conclude this season.

Garbers led the way for the Cal offense finishing with 285 yards on 20-of-30 attempts through the air and a touchdown to go along with a game-high 72 yards rushing and the go-ahead touchdown on the ground.

On the other side, Mills was able to put up a solid performance outside of the third-quarter turnovers with 283 yards passing on 26-of-35 attempts and a touchdown.

The Bears’ National Defensive Player of the Year candidate, linebacker Evan Weaver (89), entered the game leading the nation in nearly every tackling-related statistical category and finished the day with 13 more total tackles, seven of them on his own, and one tackle-for-loss, to give him 164 on the season.

The Bears will look to improve their record next week to improve their bowl bid when they take on the UCLA Bruins at the Rose Bowl in their final match-up of the regular season. They will likely relish in today’s victory for the moment though.

Stanford will look to close out the 2019 campaign as best they can against the No. 16 Fighting Irish, who will be coming in looking to improve upon their record in hope of securing a New Year’s Day bowl.

“We keep churning,” coach Shaw said in postgame. “We’ll find a way to get back and come back seven days from now and try to end the

season on a high note.” 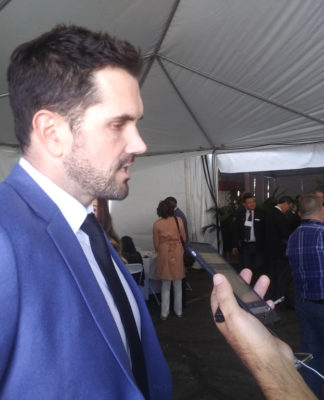